The delicious secret to understanding men 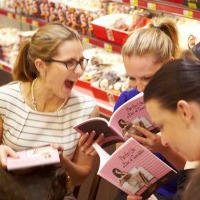 Men Are Like a Box of Chocolates, my humorous dating advice book, was published in 2011. It was sold in bookstores, gift stores and chocolate stores, and received media coverage in Cosmopolitan, CLEO and many more. In 2014, it was selected by Hollywood Swag Bag as one of 20 Australian products to be gifted to Ellen DeGeneres for Christmas. (Pretty cool, huh!)

Men Are Like a Box of Chocolates uses chocolate as a metaphor for men. A drunken larrikin? He’s a Rum Ball. A beach babe? He’s a Coconut Chocolate. A heart-of-gold do-gooder? He’s a Honeycomb Chocolate. And a good kisser? He’s a Chocolate Kiss. There are over 30 ‘flavours’ altogether. Offering sound advice in a unique, hilarious and mouthwatering way, it’s perfect for any woman who has ever turned to chocolate during a romantic crisis.

Check out the front cover, table of contents, three selected chapters and back cover of Men Are Like a Box of Chocolates by scrolling through this delicious book sample below.

What do Brad Pitt, Hugh Jackman, Russell Brand and Charlie Sheen have in common? They’re all featured in the Men Are Like a Box of Chocolates book trailer! You’ll notice Donald Trump is also featured. Please note this video was made back when Donald Trump was a famous New York businessman, TV personality and socialite and had not yet become a divisive President of the United States. If this video were made today, ‘Donald Trump’ would be replaced with ‘Jeff Bezos’. Anyway, check out the celebrities you might like to take a bite out of…

Want to know which chocolate your man or ex is? Here’s a snapshot…

Enjoying a night of humorous reading. It's like a secret bible! So much TRUTH! Men Are Like a Box of Chocolates! pic.twitter.com/E6QdNoTU0Z

Gifting @ellyklein's book to a girl you like is a bad move for any boy. But it's so fucking funny, I couldn't help it. #HilariouslyOriginal

How to snag Men Are Like a Box of Chocolates 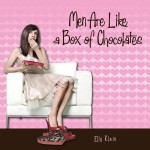 If you would like a copy of Men Are Like a Box of Chocolates, just email me at elly@ellyklein.com or via the contact form below and let me know: 1) how many copies you'd like, and 2) the address I'd be sending them to. I'll find out the cost of shipping and handling and we'll go from there.

Individual copies are $7 each. Cartons of 40 for a hen's night / bachelorette party or to use as a fundraising item are $120, which is $3 per book. Prices are quoted in Australian dollars.