The humorous dating advice book that started it all

My humorous dating advice book, Men Are Like a Box of Chocolates, was published in 2011. CLICK HERE for all the delicious details and to get your hands on a copy (or copies!) for yourself, your girlfriends, your sisters or for your hen’s / bachelorette party!

Since then, I’ve been published or featured as a dating expert in numerous reputable media outlets in Australia and the United States, including TV, radio, podcasts, magazines and websites.

Media coverage in a nutshell

Here’s where I’ve been quoted or interviewed:

Here’s where I’ve been published: 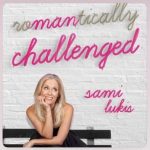 ♥ Romantically Challenged with Sami Lukis (11th July 2021): I can’t even begin to tell you how delighted I was to be a guest on this podcast – one of the best Australian dating and relationship podcasts for women and men over the age of about 35. My episode is Episode 18: Where Are All the Good Men? I answer this extremely common dating question in vivid detail. I bet you’ve never heard a layered, nuanced and definitive answer like this before! CLICK HERE to listen. Or you can find (and subscribe to) the podcast by searching ‘Romantically Challenged’ in your fave podcast app. I’ve been invited back on, so I can’t wait ’til the next ep!

♥ My first TV appearance (Studio 10, Monday 3rd June 2019). While I’ve been quoted in many articles and featured as a guest on radio and podcasts, I’m proud to say my first TV appearance was on Studio 10 alongside Australian TV legends Kerri-Anne Kennerley, Angela Bishop, Joe Hildebrand and Sarah Harris. Studio 10 is a live daily morning show (Monday – Friday with Saturday highlights) that’s nationally televised across Australia on Channel 10.

This segment was about how to improve your online dating profile, which included me rewriting the famous Maurice Parker’s dating profile. Maurice was a presenter on the classic Australian 80s TV show, Simon Townsend’s Wonder World.

In the segment, we covered:
> The No. 1 problem with most online dating profiles
> Maurice’s dating profile ‘before and after’ my writing
> Why I included a personal piece of info about Maurice
> My top 3 tips for selecting your dating profile pics
> How the profiles I’ve written have led to marriages

♥ What Do Men Really Think (April 2017): I was featured as a relationship expert in this article entitled The Most Important Thing A Man Wants in A Woman. You can scroll down to No. 5 and read it HERE.

♥ Eventbrite blog (May 2016): I was quoted in this article about live events going wrong. I’m proud to say I handled it with finesse, but it was one of the most upsetting experiences of my professional life. You can scroll down to No. 5 and read about it HERE.

♥ 2GB Radio (April 2016): I was interviewed on the show Weddings, Parties, Celebrations. We discussed my book, my knack for writing dating profiles and my love life at the time (I’d just met David and he was proudly watching and listening outside the studio). Sadly, the segment is no longer available to listen to online. I wish I’d made a copy of it!

♥ Cheat Sheet (October 2015): I was quoted in an article entitled The Best Relationship Advice I Ever Received. If you’re interested in what I had to say, scroll down to the 8th and final tip HERE.

♥ Bustle (August 2015): I was quoted in an article on the popular women’s website, Bustle, entitled How to Find Love Online. If you’re interested in my advice, scroll down to tip No. 2 HERE.

♥ Redbook Magazine (January 2015): I was quoted in an article for the American print magazine, Redbook, about ‘dinner and a movie’ dates. America’s most popular star of The Bachelor, Sean Lowe (who just happens to be my favourite Bachelor of all time!), was quoted in the same article. I still have a copy of it.

♥ eHarmony (December 2014): I was quoted in an article on the eHarmony blog entitled 3 Unforgivable Mistakes a Man Can Make on a First Date. Mine is tip No. 1. As long as you promise not to send me an angry email, you can read my strangely controversial piece of advice HERE. 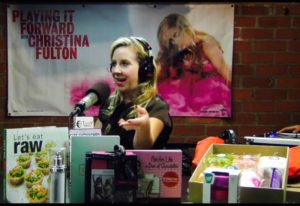 ♥ The Huffington Post (September 2014): This article I wrote was entitled Can Love Grow? Or Does True Love Begin with an Instant Spark? It was based on a personal experience. You can read it HERE.

♥ 30 Ever After blog (February 2014): I was interviewed in depth about dating, relationships and my humorous dating advice book, Men Are Like a Box of Chocolates, in this article. Unfortunately, it’s no longer available.

♥ Cosmopolitan (November 2013): I was quoted throughout an article about summer date ideas. Sadly, it’s no longer available.

♥ Basic Bananas (November 2013): I was delighted to be interviewed by these small business marketing gurus for their popular podcast. Listen HERE.

♥ Cox Plate Ladies Luncheon (October 2013): I was invited to entertain the ladies at one of the premier spring racing events in the lead-up to the Melbourne Cup – the Cox Plate Ladies Luncheon. Based on my humorous dating advice book, Men Are Like a Box of Chocolates, I gave the ladies ‘chocolate readings’ and helped them discover which chocolate their man (or ex) is, and how to handle him. It was all light-hearted and fun.

♥ The Huffington Post (November 2013): This article I wrote was entitled The Night I DIDN’T Sleep with a Rock Star. You can read it HERE.

♥ Complete Wedding (October 2013): For about 18 months, my book was a live hen’s night (bachelorette party) event running in two cities (Sydney and Melbourne). This article I wrote was entitled How to Have an Awesome Hen’s Night on Any Budget. Unfortunately, it’s no longer available.

♥ Cosmopolitan (October 2013): I was quoted throughout this article about bad dating habits. Sadly, it’s no longer available.

♥ She Knows (September 2013): I was quoted throughout an article about how to feel happy again after a breakup. You can read it HERE.

♥ Cosmopolitan (September 2013): I was quoted throughout an article about how to feel happy again after a breakup. Sadly, it’s no longer available.

♥ Cosmopolitan (August 2013): I was quoted throughout an article about moves a woman might think are sexy but, surprisingly, men really aren’t that into. Unfortunately, it’s no longer available.

♥ Cosmopolitan (August 2013): I was quoted throughout an article about flirting – whether you want to meet him, have just met him, are dating him or are in a long-term relationship with him. Unfortunately, it’s no longer available.

♥ Cosmopolitan (August 2013): I was quoted throughout article about taking sex out of the bedroom and into different parts of the house. Sadly, it’s no longer available.

♥ Cosmopolitan (August 2013): I was quoted throughout an article about ‘save-cations’ – going on a vacation to save your relationship. This particular article is no longer available, but see below for the content.

♥ CLEO (September & October 2012): I was featured in one of Australia’s top women’s magazines three times in two months. I appeared in an article about women who had a life like a TV character. My character was Carrie Bradshaw from Sex and the City. In another two articles, I was quoted giving sex and relationship advice. I still have physical copies.

Post 1: Lessons from an RSVP Matchmaker
Post 2: 5 Steps to a Successful ‘Dinner and a Movie’ Date
Post 3: The Good, the Bad and the Ugly… A Personal Account of an Online Dating Journey
Post 4: Dating and Dining: A Food and Wine Lover’s Guide to Dating
Post 5: Armed and Dangerous: The Best Dating and Relationship Advice Books
Post 6: Why Solo Travel Rocks: Wild Adventures and Top Tips
Post 7: Your RSVP Profile Checklist: 30 Things You MUST Get Right
Post 8: How to Have a Merry Christmas When You’re Single

♥ The Book in You live event (July 2012): I was invited to speak on a panel of authors for ‘Girls’ Night Out’, held at the Omega Lounge in City Tattersalls, Sydney. The event was called The Book in You.

Article 1: Would you let a wealthy stranger fly you away for a date? (No.)
Article 2: Should you ever invite an ex to your wedding? (Yes.)
Article 3: Should you postpone a break-up ’til after Xmas? (No.)

♥ Mamamia (June 2012): This article I wrote was about punching above my weight. It was based on a personal experience. You can read it HERE.

♥ Femail (January 2012): I was interviewed for this popular women’s website about my humorous dating advice book, Men Are Like a Box of Chocolates. They also ran a competition to win one of ten copies of my book, and over 1000 people entered! You can read the interview HERE.

♥ Sydney Morning Herald (January 2012): I was featured in this article about one of my passions outside of dating and relationships, which is mentoring underprivileged teenage girls. I mentored four, who are all women now, and we’re still in touch. I’m particularly close to one of them (who, sadly, isn’t featured in this picture). You can read the article HERE.

♥ Mosman Daily (December 2011): My local paper where I grew up gave my humorous dating advice book, Men Are Like a Box of Chocolates, a nice mention. I still have a physical copy of it.

♥ Inner West Courier (November 2011): This newspaper covered the book launch of my humorous dating advice book, Men Are Like a Box of Chocolates.

♥ My Book Launch (October 2011): My humorous dating advice book, Men Are Like a Box of Chocolates was launched in Sydney, Australia, on Wednesday 19th October 2011 at a chocolate café in Balmain. Here are some of my favourite pics from the event:

The book (next to an I Love Chocolate tin) 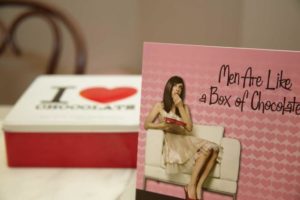 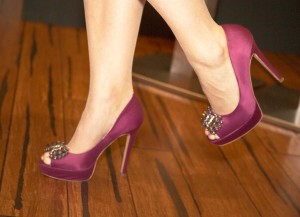 Me giving my speech and accepting flowers 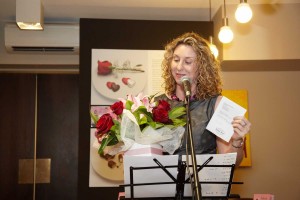 The verdict is in – women LOVE the book! 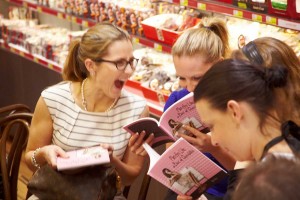